I am currently preparing a paper that I will present at an Agricultural History Society of Ireland (AHSI) conference in June. The title of my paper will be “Flax in prehistoric northern Europe: insights from archaeobotany”. I always enjoy participating in AHSI conferences because they attract people from a great variety of backgrounds.

The AHSI is open to all people with an interest in the history of agriculture and food in Ireland. Their website notes that current members include historians, farmers, archaeologists, palaeoecologists, agricultural advisers and specialists, as well as students and the interested public. By bringing together such a variety of people, the AHSI conferences often encourage me to look at ancient farming in new ways, highlighting traditional practices that I had not previously encountered or considered.

My paper will examine archaeobotanical evidence for flax in prehistoric northern Europe. Flax was one of the first cultivated crops to be introduced into Ireland during the Neolithic period, along with wheat and barley (McClatchie et al. 2014). Flax is what we might call a ‘multi-functional’ plant. Linen textiles can be produced through the retting of flax stalks, oil from the crushed seeds can be used in cooking, lighting and other activities, and flax leaves provide useful fodder. 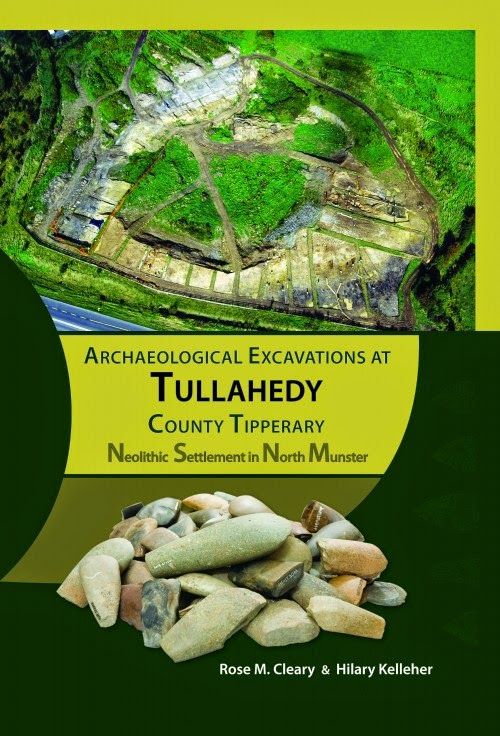 One of the earliest and largest prehistoric flax assemblages ever found in Ireland was recorded at Tullahedy, Co. Tipperary (McClatchie 2011), where a Neolithic enclosure with associated settlement was discovered during road construction works (Cleary and Kelleher 2011). The site at Tullahedy was located on an esker. The surviving remains of the enclosure consisted of a palisade on two sides, with stretches of mire and open water surrounding the esker and forming a natural barrier or enclosing feature elsewhere. The main settlement evidence comprised three Neolithic structures (possible houses) with associated hearths. Neolithic pits and hearths were recorded in the vicinity of all three houses, and many further pits were located nearby. Later during the Neolithic, deep layers of glacial till were deposited onto the lower slopes of the mound. There are also indications of use of the mound in historic times.

Many Neolithic artefacts were uncovered during the excavation, including polished stone axe-heads, arrowheads, scrapers and pottery sherds. Some of the artefacts reflect imported goods, such as exotic axe-heads and non-locally produced pottery. The excavators suggest that Tullahedy functioned as an exchange centre, connected to the trading of resources including crops, raw materials, craft produce and perhaps people (Cleary and Kelleher 2011).

Tullahedy is an unusual and important Neolithic site in Ireland due to its large size, relatively unusual architectural arrangement, and quantity and variety of artefacts and crops. More than 40 charred seeds of flax (Linum usitatissimum L.) were recorded in Neolithic deposits at Tullahedy, which again is unusual, because oily seeds such as flax are relatively rare in the archaeological record. What was happening at Tullahedy that produced such a large quantity of flax remains?

The answer may be related to perceptions of identity in Neolithic Ireland. Social and cultural differentiation may have been marked by clothing during this period. Textile production would have enabled the creation of garments to signal how individuals were placed in society, as well as symbolising changes in their status (Sørensen 1997). Textiles from plants such as flax may have helped individuals, therefore, to create and maintain social distinction. At a morphologically unusual and artefact-rich site like Tullahedy, such symbolism may have been particularly important.

The evidence from Tullahedy is just one of the examples that I will highlight during my paper at the AHSI conference. The conference, “Farming and local economies today and yesteryear in north-eastern Ireland”, will take place from 5th to 7th June 2015 in Armagh, Northern Ireland. For further information on the conference, see here.

You can purchase the excellent book on the Tullahedy excavations here.