One of my current roles is the provision of environmental advice to the team who is excavating Swords Castle in Co. Dublin. A fantastic new project has been established, Swords Castle: Digging History, which is a Community Archaeology project designed and supported by Fingal County Council. Under the leadership of Fingal’s community archaeologist, Christine Baker, the project helps to engage both locals and tourists with fascinating aspects of our past. As the project website notes, “A series of ‘knowledge gaps’ were identified in the Swords Castle Conservation Plan 2014.  Although it is the best surviving example of a Dublin archbishop’s palace and was an important administrative centre there are some questions that remain unanswered; Is there a graveyard underneath the castle? Were there buildings within the yard? How old are the different buildings? Through this project we hope to answer at least some of these questions.”

The 2015 excavation season took place in August and September. Members of the public were invited to play an important role in the excavation as volunteers, where they had the opportunity to experience many different aspects of archaeological excavation, including digging, organising artefacts, washing pottery and bone, and processing environmental samples. My role on the project was to introduce the concept of environmental archaeology to people who had little or no experience in archaeology. I explained how the tiny fragments of plants (often seeds) can become burnt and are thereby preserved, and they can survive in the soil for thousands of years. We discussed how a great variety of plant remains can be recovered from soil samples taken during the excavation, and these plant remains can tell us about past diets and environments. Many of the volunteers were amazed and fascinated by this ‘hidden’ aspect of the Swords Castle excavation – who would think that such tiny things could survive and reveal so much! 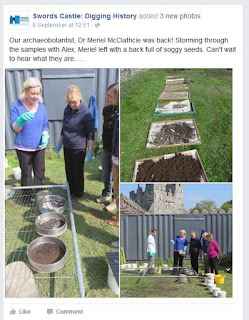 When I was at the excavation, I also showed the volunteers how to process these soil samples. We used the flotation method to separate preserved plant remains from the soil. This method involves placing the soil sample into a bucket, adding water and stirring it all gently. Any charred plant remains and other organic material such as wood charcoal usually float to the surface of the water. The water is then poured into a fine-mesh sieve to catch the organic remains, and this material is left to dry before being bagged up. Lots of samples were processed, and now I have them back in my lab, awaiting analysis. Watch this space for the results!
Posted by Meriel McClatchie at 12:42