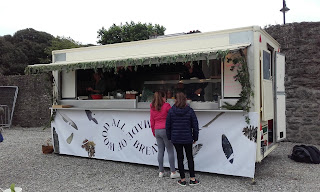 A few weeks ago, I was delighted to participate in a public event at Swords Castle. The event formed part of a collaborative project that I developed with Fingal Community Archaeologist Christine Baker, Fingal Public Art Coordinator Caroline Cowley, and an invited curator and artists.

The project, ‘All Bread is Made of Wood’, is curated by Anne Mullee, who invited artists Fiona Hallinan and Sabina Mac Mahon to contemplate bread and its elements as a vehicle for the transference of knowledge and memory as embodied in its production. The project is composed of a series of private and public interactions, including recipe salons with local African women’s group and the area’s older population, and public events where hypotheses of bread and its elements are anatomised and considered.

As part of the Swords Castle - Digging History community excavation project, I am undertaking archaeobotanical analysis of the excavated deposits, and I have discovered a large quantity of early medieval and medieval food remains, particularly cereals. Inspired by these results, ‘This Dirt’ took place on 29th August, and brought together methods of baking and food production from North County Dublin’s past and present. Utilising Swords Castle as a catalyst for exploration, ‘bread’ acted as the threshold for investigations into contemporary and ancient local food culture, somatic learning and haptic processes of making.

"Seed Carriers" was a pair of activities devised by Fiona Hallinan. Plant macro-remains found in archaeological deposits at Swords Castle were made visible in two ways: in one instance, figuratively, as illustrations on nail transfers applied to the hands of participants, and in another, constitutively, as ingredients used in the menu of an on-site food truck (see image above). It was really exciting for me to see the tiny seeds re-imagined as nail transfers, while the food from the food truck showed how 'basic' ingredients from early medieval and medieval Ireland can provide a creative and delicious meal.

Sabina Mac Mahon presented a pop-up exhibition – the first part of Anti-anti-pasta, a project exploring the life and work of little-known (imaginary) Italian Futurist Ermenegildo Cervi (1897-1966) who settled in north county Dublin following the publication of his fellow Futurists’ Manifesto of Futurist Cooking in late 1930. The manifesto called on Italians to turn their backs on pasta, a staple foodstuff believed to induce lethargy, pessimism and nostalgia, and therefore contrary to the Futurists’ belief in technology and speed. Cervi became disillusioned with the Futurists’ anti-pasta stance and, assured of Irish people’s enthusiasm for starchy foods like bread and potatoes by relatives who ran a fish and chip shop in Dublin, decided to move to Ireland and attempt to establish a new nation of pasta-eaters here. This was a beautifully presented and wonderfully creative exhibition that really got me thinking about cultural attitudes to certain foods.


Our event was featured on the RTE Radio 1 arts show, Arena on 28 August. I'm looking forward to working with the team again. Watch this space for further events.
Posted by Meriel McClatchie at 17:28