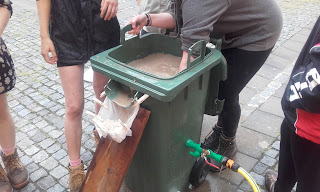 During archaeological excavations, we often collect soil samples from different deposits to check if any plant remains are present. Plant macro-remains must be extracted from the soil sample before they are identified. The flotation technique is used to process bulk soil samples containing charred plant macro-remains. Differences in the density of organic and inorganic material mean that flotation is useful method for separating the two, because the specific gravity of water lies between that of organic and inorganic material. Flotation involves the placing of a soil sample into a container, then immersing the sample in water. When agitated, organic material (such as charred plant remains) is released from the soil matrix and floats to the surface, or is suspended in the water, whereas inorganic material sinks to the bottom of the container.

We often use mechanised flotation systems or flotation tanks for efficient processing of soil samples. This summer, I was thrilled to use a new type of system: the converted wheelie bin. This flotation system was created by team members of a Serbian excavation project over the past few years, and I was delighted to join the team in July 2018. We undertook excavations at the fortified centre of Gradiste Idjos, working with an international team from Serbia, the UK and beyond. You can find out more about the project here. 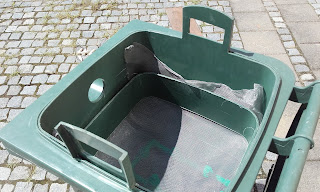 One of my roles on the project this summer was to oversee flotation of soil samples using the wheelie-bin system. It is very simple, but very clever. Water is pumped into the base of the bin through an inlet. A fine mesh (1 mm) is suspended just below the surface of the water in the bin, and the soil sample is placed onto the mesh. As the soil is disaggregated in the flow of water, the organic material floats to the surface and is then caught by a smaller sieve (minimum 0,3 mm mesh) at a run-off point, cut into the top of the wheelie bin. The residue does not float, remaining on the 1 mm mesh. The wheelie bin proved to be an excellent innovation and could be moved around with little effort. I am very much looking forward to using it again next summer!

Posted by Meriel McClatchie at 10:52